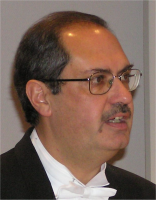 Riccardo Troncone is presently Full Professor and Head of the Department of Paediatrics at the University Federico II in Naples, Italy. His speciality is Paediatrics, but he has also been trained in mucosal immunology (1985-1987) at the University of Edinburgh under the direction of Professor Anne Ferguson. Coeliac disease (CD) represents his main interest of research and most of his scientific production is focused in this area. He contributed among others to research areas such as mucosal cytokines, tissue transglutaminase (tTG) antibodies and the relationship of CD with autoimmune diseases. In the 5th framework he has been co-ordinator of the subproject Pathogenesis within the EU-Cluster on Celiac Disease(Coeliac-EU/cluster N°QLRT-1999-00037).

More recently in the 6th framework, he has participated to the CDEUSSA project. At his university he participates in a Centre of Excellence established by the Italian Government: “European Laboratory for the Investigation of Food Induced Diseases (ELFID)” whose main aim is to co-ordinate research on food intolerances at the European level. He has recently led a Working Group on CD established by the Federation of Societies of Paediatric Gastroenterology (FISPGHAN). He is scientific advisor of the Associazione Italiana Celiachia and represents a link with patients associations. He is General Secretary of ESPGHAN and Senior Associate Editor of J Pediatr Gastroenterol Nutr.