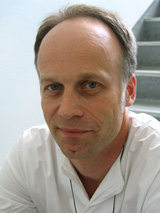 Prof. Ludvig M. Sollid (MD, PhD) is professor of medicine (immunology) at this institute, and he is the head of a research group of about 15 people. Prof. Sollid has participated in four EU projects, and he has been the co-ordinator of two EU-RTD projects on CD (BMH4983087 and QLK1-CT-2000-00657). He and his group have made many key findings in relation to the genetics and immunology of CD. He identified DQ2 and DQ8 to be responsible for the HLA effect in CD. His group made the seminal findings that gluten reactive T cells can be cultured from intestinal biopsies of CD patients (but not controls), and that these T cells recognize gluten peptides in the context of the disease associated DQ2 or DQ8 molecules. These findings have paved the road for many subsequent findings of CD pathogenesis. His group played a central role in identifying the first sequence of a DQ2 restricted gluten T cell epitope. Importantly, Ludvig Sollid and his co-workers reported that this epitope is deamidated. They later showed that the deamidation of this and other gluten T cell epitopes is mediated by the enzyme tissue transglutaminase. His group was able to produce soluble DQ2 molecules. These molecules have been used to stain and visualize gluten specific T cells with HLA tetramers, and to solve the crystal structure of DQ2 in complex with a deamidated gluten peptide. Sollid is the member of advisory boards of several foundations, companies and research centres dealing with CD both in the and in .